This week, we dedicate our weekly interview to Santa Claus!!!

Santa Claus has been very important in all our life when we were children and we had the great opportunity to ask him about his life, his thoughts about Social Media and his personal addiction to our fav app Instagram . 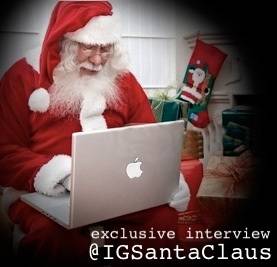 @IGSantaClaus is probably one of the most famous person in our small IG World.

Fond of Red and White pics. #SantaRWpics is its fav tag. He simply reflects his “day to day”, his own life, the people he crosses at night providing warm and unforgettable moments to all the family.

If you are a #Christmas lover you will definitely appreciate his art.

Check his stream. you wont regret it.

But let´s talk a little about him.

Our @IGSantaClaus lives at the North Pole, with a large number of magical elves, and 9  flying reindeer. Since the 20th century, Santa Claus has been believed to make a list of children throughout the world, categorizing them according to their behavior (“naughty” or “nice”) and to deliver presents, including toys, and candy to all of the well-behaved children in the world, and sometimes coal to the naughty children, on the single night of Christmas Eve. He accomplishes this feat with the aid of the elves and the reindeer. 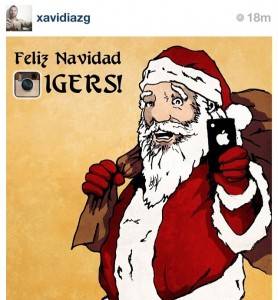 “Never been Popular before? Include it in your Christmas wish list!” he says.

The popularity of his image spawned urban legends that he was invented by The Coca-Cola Company or that his wears were red and white because these colors are used Coca-Cola´s brand colors.Historically, Coca-Cola was not the first drink company to use my modern image of Santa Claus in its advertising—White Rock Beverages had already used a red and white Santa to sell mineral water in 1915 and then in advertisements for its ginger ale in 1923.

His new addiction to Instagram provides him new ways to express his creativity and you will probably find him in thousands of Christmas Pics this year. Social Networks like Facebook, Twitter or now , our fav photo-sharing app are spreading photographs of him, love and happiness through all the globe.

“It´s a new way to keep the contact with my fans!”

“I started with Foursquare one year ago, but it´s simply so boring “checking in” every two minutes”!!!

When did you first join IG? How?

I joined October 16, 2010. I remember I received an original “wish list” by email from 2 young guys in San Francisco who told me they´ve just launched a new photo-sharing app and asked me, as a Christmas gift wish, “to make IG successful”. I think they deserved it as they were good all year long and worked a lot for that.

A good friend @josh who works at Instagram knew how I loved to take images on my iPhone and suggested I download and share via this new app he was using and loving, called Instagram, the rest is history. I was hooked! 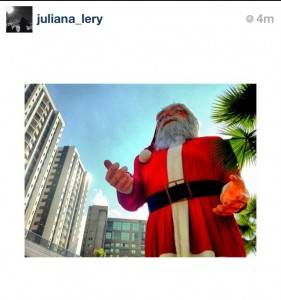 At the beginning my addiction of posting and checking others images was disrupting my life. I couldnt focus on my Christmas gift deliveries and my trips planification were a mess so I’ve scaled little back, to checking right when I wake up, once in the afternoon and once just before bed. Sometimes I fall asleep while Instagramming..

It’s the first social network that is purely visual. It’s about sharing a visual experience and I’m a highly visual person. When you fly high and fast at night, you need a very good sight!

I also love how it gives me the power to time travel around the globe. I can be transported to places in seconds and experience things in a simple way through other peoples photographs and  it makes my job is quite easier! Traveling all over the world for just one night was frustrating before instagram!

I have many pics i love, but if I have to pick just one it would have to be the one of me in Bello Horizonte, Brazil where it is summer right now! It symbolizes how lucky I am to travel all over the world, it symbolizes my love for children and for Igers all over the world. (see @juliana_lery pic beside).

Were you already found of  photography before?.

Yes, I’ve had a camera in my hands since I was 1911 and now I´m an Iphone Addict too. And I will have one till the day I die, no question, like our beloved Steve Jobs probably. This Christmas, we will miss you a lot Steve! 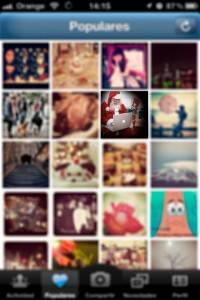 Do you remember your first Pop? How did you feel?..

My first popular picture was back in last december when I had less than 100 followers and I was very surprised at noticing I suddenly had over 10.000 likes on my last picture (normally I had about 20 maybe 25 likes). My pic represented one of my fav. It´s me, at home with my Mac.

I didn’t know the picture had been on popular, and it wasn’t until someone left a comment about seeing my pic there, that I realized that was the case. I couldnt believe it so i tool a screen shot!

It was fun, and it felt like an achievement, that I finally got some acknowledgment for my work. And I still LOVE the picture.

They’ve come to understand and accept it as part of who I am right now. I´m @IGSantaClaus !

And i won´t leave my iPhone anymore! By the way, I asked myself for an iphone5 for 2012 and a lot of Androiders asked me for an Instagram Android Version soon! 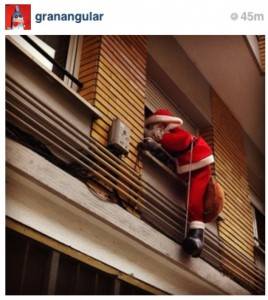 You will participate to Christmas Gifts Delivery tonight. Can you say a little bit more about it?.

I’m super excited about. After helping Instagramers.com and their Instagramers Network all this year,  I also participated with Instagram Team in the launching of their website called Blog.Instagram.com .

Recently, some of my friends announced their plans to create a workshop art too, around our passion and mobile photography called JuxtBlog or @ampt and @ideaExchange recent artistic and creative people initiatives too!!

At the same time Igers around the world asked me to help them hitting the Populars List. Thousands and thousands of them so a lot of work to do for 2012!

A lot of people asked me to win the @joshjohnson challenge or the @photoftheday contest but I can´t do miracles… That´s quite impossible! Better ask your own god or your divinity! 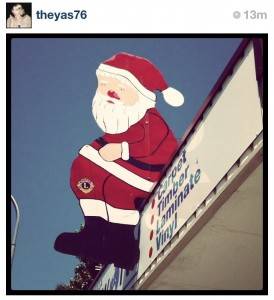 Remember it’s not about the number of followers it’s about Community, Engagement and Friendship. I’d rather have 100 engaged followers who are commenting and enjoying my work, than 10,000!

And if you´re good during all year long with your IG friends you will be soon in Pops!

You can join the great instagramers community contacting with the awesome ManIger in each local city or country group too!

Remember too you can use Instagram in the web via @extragram @ink316 @statigram @Webstagram and make a lot of gifs with @casetagram @keepsy or @stickygram and loads of more nice Instagram services here!

Thanks so much to accept answering our interview and long life to@IGsantaclaus in Instagram!

Merry Christmas to all!!

– Thanks to @elhombretecla for the design of Most Pops and profile pic, and @xavidiazg @juliana_lery @granangular and our australian friend @theyas76