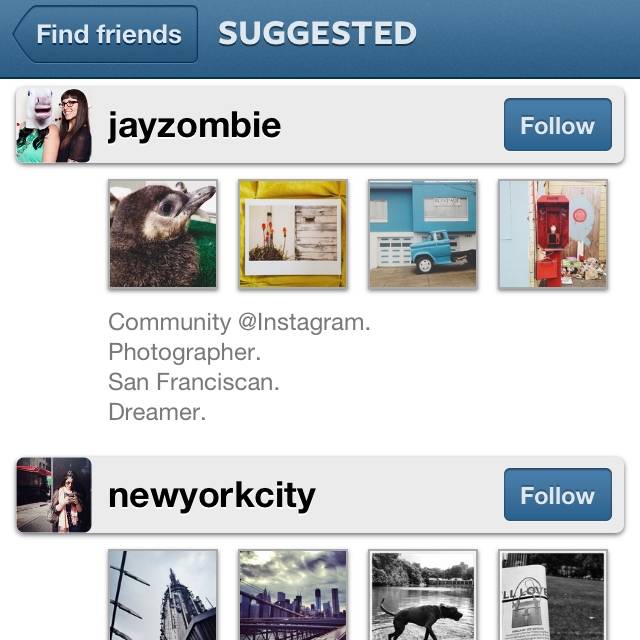 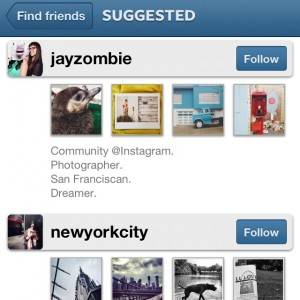 If you remember the very first day you joined Instagram, you may have seen a list of Suggested Users, IG users who the Instagram Team suggests you follow. Instagram launched the Suggested Users List last year as a way of showcasing IGers doing inspiring work on Instagram. This feature is similar to the Twitter tool and is a cool way of discovering new people in the network.
.
According to our info, the list was formed by Instagram team itself and has been gradually growing,each week including new members depending on quality of their feeds (and some people recommendations). This short list is probably up to 300 people now and remains something quite unknown for most Instagramers. Being on The Suggested Users list means your follower numbers will suddenly surge and keep on rising by the hour. A wish come true for almost all users.
.
(Last improvements at Instagram users suggested list here) – August 10th –
.

You find the Suggested Users List, through your Profile, then Find Friends. The Suggested Users List is also presented to all new users when registering for Instagram. In my opinion, it’s a good way of engaging newbies with the App and making them understand how it works just by discovering other people’s streams, pics and comments.

How do you become a Suggested User?

According to Instagram post here, there’s no way of guaranteeing selection as a Suggested User. However, when the Instagram community management team reviews accounts for inclusion on the list, there are a few common attributes they look for.

– Instagram is a photo-sharing community. In promoting Suggested Users, Instagram seeks to highlight members of the community with exemplary content and conduct in line with its Community Guidelines.

– Instagram is always looking for new and exciting content to surface. To present new users with a curated set of talented users, they continually review, add and remove users from the list. We don’t know exactly how many are added each week but they recently announced that in coming months, the suggested users list would be refreshed more often, making it easier for people to follow a wide variety of great users. The list will be designed to be refresh in an ongoing way rather than stand as today’s permanent suggested users list.

– Be careful. Instagram is a powerful tool for brands and businesses. They “welcome” collaborations between brands and users, but do not include users on the list whose photos could cause confusion over Instagram’s involvement in paid partnerships or brand endorsements*

(* This last paragraph is hugely important. Instagram noticed a rise in sponsored posts appearing on suggested users’ feeds and wanted to clarify  it’s not the type of content they envision being the right experience for new users. People in the list should not use their streams for “business” if they want to remain in the list. You can read Suggested User Guidelines in Instagram Official Help Center here: https://bit.ly/instasul )
.

So how can you be featured amongst the many millions of other users? Some tips.

.
In the last few months I’ve heard a lot of different stories.  Anecdotes of users featured just because they were long time friends of IG Team, some other people got it after sending a mail to Instagram Team (explaining their “credentials” and proof of involvement within the app). Some applied directly through mail and asked to be part of Suggested Users Lists. Finally, other IGers were recommended to Instagram Team by other featured users. Being active in Instagram communities development or leading yourself a cool project around Instagram can be a strong asset.
.
I wish you good luck and maybe you’ll get on the Sugested Users List soon! If you don’t, don’t worry! My personal opinion is that sometimes it’s cool “just to live in a small IG world” where you know all your followers and followings by their IG handles and their real names.
.
(Last improvements at Instagram users suggested list here) – August 10th –
.
@philgonzalez
(thanks to my friend @rugfoot for his kind help in translation)
.
.