This week I had a special “love at first sight” with a french guy gallery. It´s very very very creative and original and I thought he really deserved to be known on IG. A great edition work is done in all his pic.. Definitely.  His name, Sylvain, his nick @sb33 . You can visit his stream here and learn More about him and his tips below the pic. 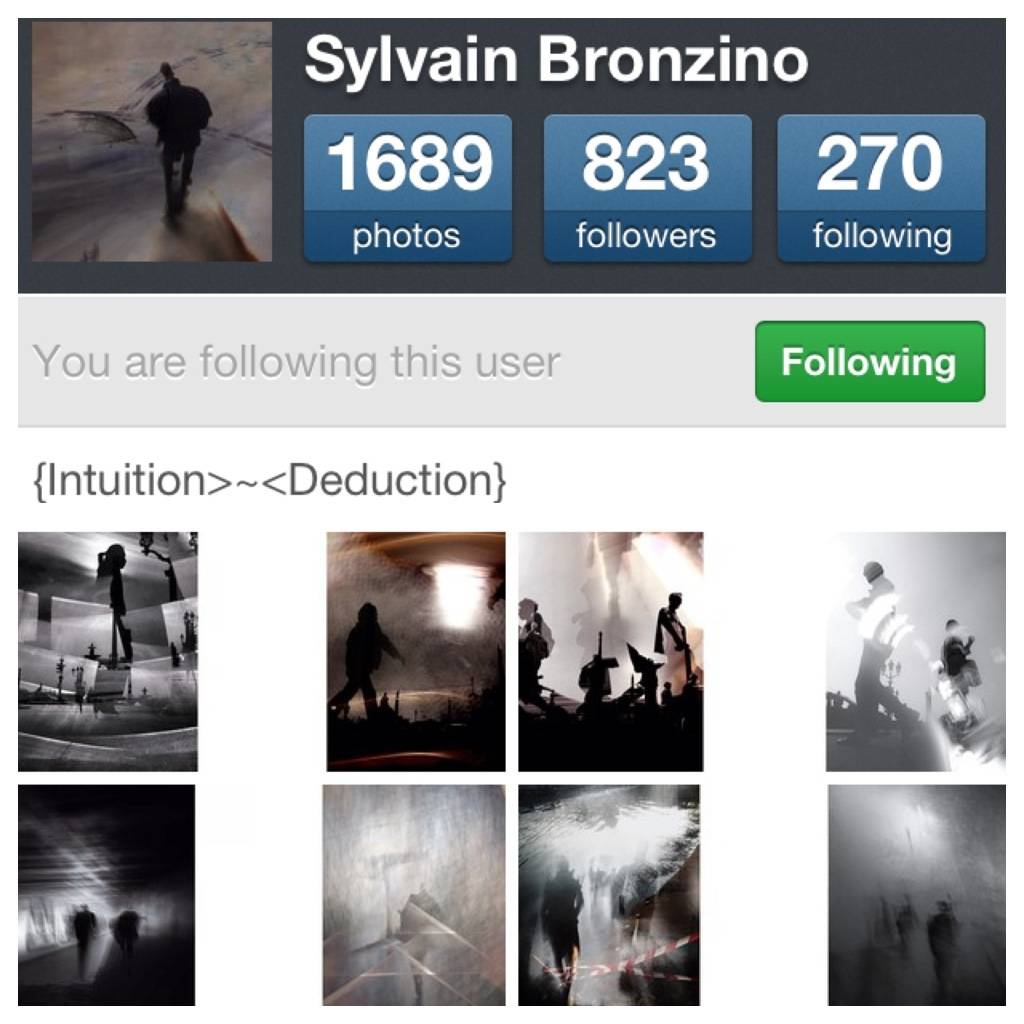 Sylvain is 44 and live in Paris.

He is married and have a 2 years old son. He studied fine arts and graphic design at school but never worked in this area. he doesn’t feel frustrated but he has a creative potential to exploit and that’s what he does on Instagram. To pay his bills, he has been working in the luxury fashion industry as retail manager for more than 15 years.

.
Painting was his first passion and great artists such like Pierre Alechinsky or Antoni Tàpies inspired him.

Music is his second inspiration source, the music in itself since he shoot while listening to music very often; and also through Album covers, to him it’s Art!

“The sleeve design of records label like ECM and 12k have had a great influence on me about that. That said I really appreciate a wide range of music, from electronica to jazz, not to mention contemporary and hardcore!” he says.

He really started with photography when the first affordable digital cameras appeared on the marked so about 10 years ago. He admits, Iphone really changed his approach just because he has it all the time with him and it is very discreet to use so for street photography it was a great plus. It allows him very “close up shots”, “it’s a pure joy to take advantage of that in the subway“!

.
He discovered Instagram through Facebook in the beginning of last year, it was appealing for him but he really start with IG only few months ago.

“To me it’s a great opportunity to reach the genuine audience of photograph lovers. You don’t need to be judged by professionals to get this access. Moreover, thanks to the very powerful apps available now, you don’t even need a computer so it’s like a short cut between your creativity and the public.”

IG also helps him to keep a learning mindset, he always tries to post better and better images and some artists he follows have a very refreshing approach which inspires him sometimes, he says…

.
He plays with plenty of apps but his favourites are Superimpose for the merging option, Picture show for the double exposure, Flowpaper to add graphics, and Snapseed for the final editing.

.
“My creation process is always the same; I take two kinds of photos: subjects / figures and abstract coloured backgrounds. I love blurred outlines so I regularly benefit from the poor low light capabilities of the Iphone’s camera. I also shake the camera to accentuate motion effects. I create my own filters to avoid any repetition. I always pay maximum attention to the light in order to create movement and I love when figuration emerges from abstraction. The process is always the same but when I start editing I never know where it is going to end and that’s what I like the most!”

Thanks very much Sylvain and I´m sure your work will be soon very appreciated in Instagram.

Special thanks to my lovely friend @auroramichavila who gave me this brilliant tip  (her interview here when she was a “newbie” .