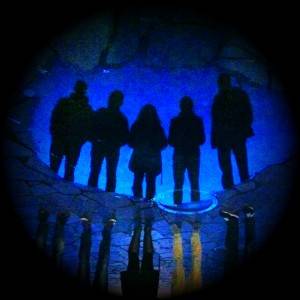 Saturday Nov. 12th @igersholland arranged their first IGwalk (#igwalkHolland01) in Eindhoven on the last day of the annual Glow festival.

Because it was a night festival, the walk started in the afternoon, and we all met in cafe Usine for a beer or two first, before starting in the glow route.

It was a challenge to take pictures in the dark with an iphone, @sfennema reallized his iphone3 couldn’t tackle the low light conditions, so he decided to enjoy the festival by eye instead.

However for me at least (@mariannehope) it made for unique, creative and interesting pictures like this reflection and silhouette team-photo beside.

The idea behind the photo and the directing and editing of it was done by me, but it was taken by a random passing American tourist. lol. 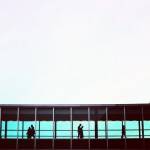 Also participating was @till_gotterbarm and his 3 future instagramers (age 5, 8 and 10).

Eindhoven was a fantastic city to photograph and I was very happy that I could take some shots of some of the fascinating architecture before the festival started.

I especially liked the BLOB, which is a very special piece of architecture and definitely worth checking out.

I think this festivals most photographed glowing feature was the half globe full of little glowing lamps in all possible colors , especially because the light conditions were acceptable for the iphone cameras as well. 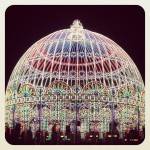 So all in all it was a great walk, probably resulting in less photos than a usual walk, but nevertheless the photos taken were quite creative and unique.

We all look forward to the next walk, which will be in Rotterdam in January!

Thanks for your interest!

NB: You can also read a Marianne´s a post about the festival (with pictures made with her 5d) on her photoblog here.