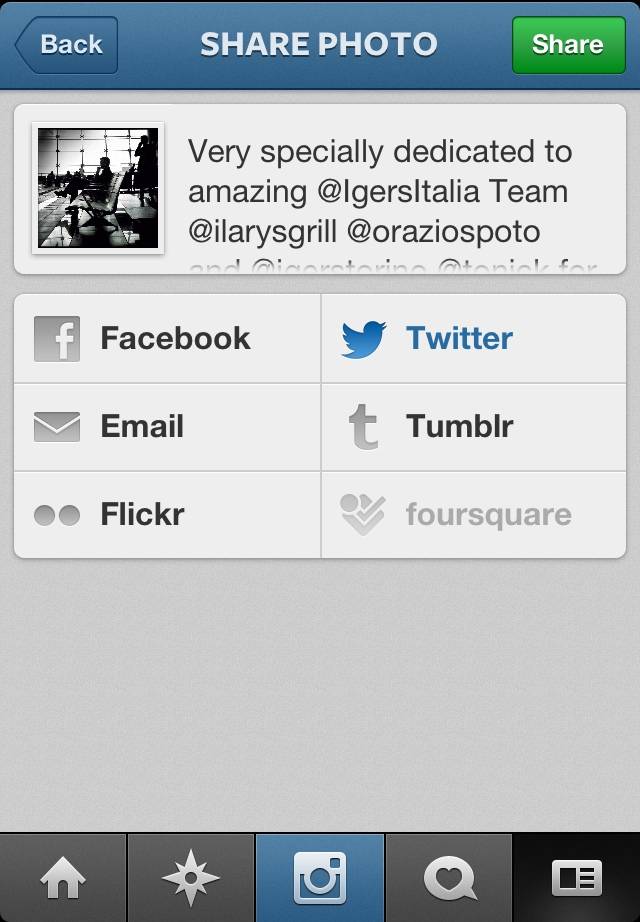 Tensions between the two companies, which were once friends (and even partners)  have now become direct competitors. We know that Twitter is working on including filters  into its app and Instagram/Facebook probably just decided to counterattack its own way.

The “Whistling Bird” company has arranged things so that technically the platform (that has strongly helped to raise awareness of Instagram service in the past)  can bring a solution to this new behavior.

With this movement Instagram wants to attract its own users traffic to its recently launched web platform (and mainly focused on generating future advertising revenues) It probably shows that Facebook do not appreciate very much “baby steps” and Instagram-Twitter integration too.

Twitter is the only site that has been denied access to the pictures sharing tool, as  Foursquare, tumblr and Facebook (of course) were not affected by this sunday ban.

However, just few hours after the ban, Michael Schonfeld, developer from Dwolla, launched a Chrome extension for viewing instagram´s photos on Twitter. The tool is called InstaTwit.

Once installed in the browser of Google, InstaTwit links to Instagram platform again to be previewed on Twitter.

The normal behavior now is that Instagram links will appear simply in twitter with no photos previews. But InstaTwit will display visual contents when opening the tweet.  However, InstaTwit only serves for Chrome computers. It’s not a complete solution as InstaTwit won’t help on tablets or smartphones, for example, but we hope peace will be back soon. Just for the simple interest of million users around the globe.

InstaTwit: A Chrome extension that solves the Instagram/Twitter drama