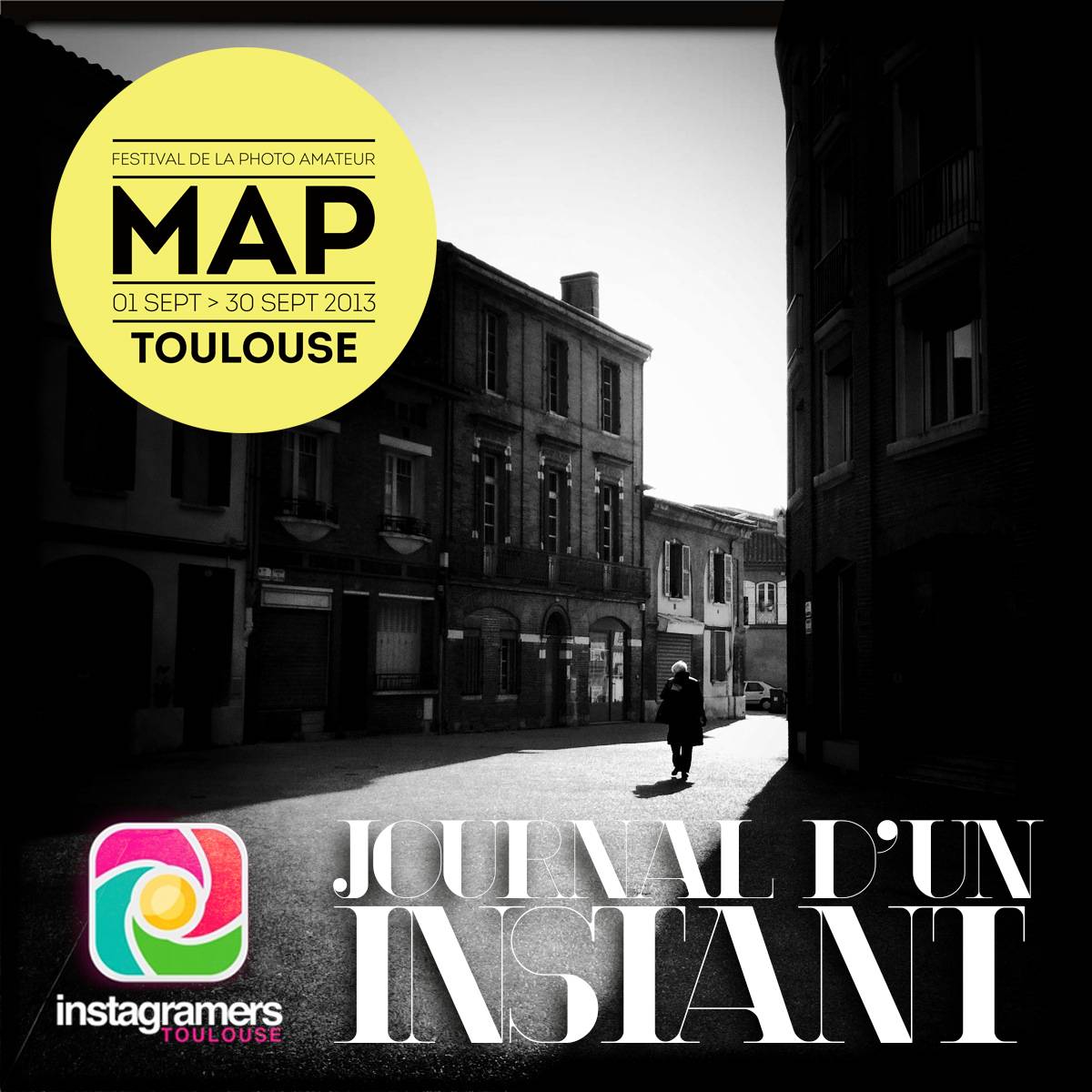 As you may know the MAP2013 photography festival takes place in Toulouse, France and this year, Instagramers.com will represent one of the most recent trend of photography, Instagram. Last year best pics were exhibited at Toulouse Train Station. This year the winner will be exhibited in Toulouse during next Photo Festival in September. 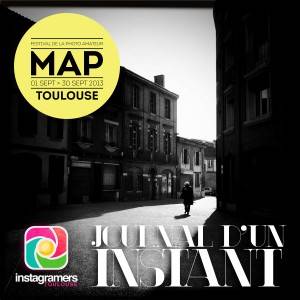 .
The Contest is open to Mobile photography only from the 15 of february to the 30 of march 2013

Thematic : Instant diary . You can submit pictures in Black and white, colour, inside, outside… catch a moment of life that shocked you, moved you, excited you. All this made by your smartphone and accompanied by a legend.

Filters: All filters and editing allowed.

How to join the contest?

We really want to receive the best quality pics from the most motivated artists so we ask you to post your pic on your feed on Instagram and please dont forget to send your instagram picture + name + surname + IG pseudo + original pictures to igersmap [@] gmail.com

You can find all details of Regulation and participation form for the contest at www.map-photo.fr

.
1rst article : Organization and dates of the call for competition
The call for competition “Journal d’un instant” is organized in association with the websites Instagramers.com, instagramersfrance.fr and his network of fans as a media partnership, the association “Les Passeurs d’Images” registered under the number 790 020 366 00015, whose head office is situated 5 place Wilson 31 000 Toulouse. The present regulation defines the applicable rules for this competition.

.
Article 3 : Participants
The call for competition is accessible for every physical person over 18, who is living in metropolitan France and abroad, here after named “the Participant”.
Each Participant can compete freely on the thematic, during the whole call for competition period (with the same written or mail address and the same surname).
Are excluded from any participation in the contest : the members of staff from “Les Passeurs d’Images”, the Community managers from @igers Toulouse (called manigers), their advisors and their family.
The Participants assure that the proposed works are original, unprecedented (it is forbidden to copy a work), and that they are only holders of exploitation rights attached to these works. As such, the Participants make their business of the authorizations of any third parties having directly or indirectly participated in its realization and/or who would esteem to have any right to assert towards him and would assume the load of all the possible payments which result. A proof can be asked. The Participants give up to the Organizers the exclusivity of their exploitation rights on the works during the duration of the competition and till the end of the festival MAP Toulouse in 2013, for the only promotion of the exhibition (program, web site, social networks). In a general way, the Participants guarantee the Organizers of the present competition against any appeals, actions or complaints that any third parties could form, on the occasion of the exercise of the rights given up to the present and more generally in conformance with all the guarantees and the commitments made in conformance with the present agreement.
“Les Passeurs d’Images” reserves the right to proceed to any check for the application of the present article. In any case, by joining the call for competition, the Participant commits to the fact that the contents of work respect all the legislations in force and more particularly : – Respect the law and order and isn’t opposite in good customs – Respect the intellectual property rights of thirds – Do not strike a blow to the reputation, private life and image of thirds. – Do not contain denigrating or slanderous comments – Do not present pedophile character – Do not strike the sensibility of minors – Do not present pornographic character – Do not strike a blow at the safety or integrity of a State or a territory
– Do not incite to discrimination which is based on the sex, the religion, the nationality, the incapacity, the sexual orientation, the age or the political beliefs – Do not incite to the crime, to the hatred, to the violence, to the suicide and to the racism – Do not incite to commit a crime, an offence or a terrorist act This list is not exhaustive. Concerning the contents of the photography, some advices to be followed and which are not exhaustive : – Pay attention to the reproduction of historical or recent buildings, being able to give the right to the grip of copyright – Do not reproduce street furniture which can be burnered by rights of third – Do not represent objects of styling (clothes, furnitures, objects) which are marked. – Any representation of alcohol or tobacco brands or situation of consumption is forbidden. Any registration and participation made with information or coordinates which are incomplete, erroneous, imitated or realized in violation of the present regulation will be considered as nothing by the organizer and will not allow to obtain one or several endowments without the engagement of the organizer’s responsibility. Any false statement of a Participant will pull its exclusion from the competition without the responsibility of “Les Passeurs d’Images”.

The participation in this call to competition is free. To be able to participate in this call to competition the Participant owes successively : – Acquaint with the regulation on MAP Toulouse’s site, instagramersfrance.fr, and instagramers.com Respect the theme : – “Journal d’un instant” – Capture a moment of life which affected you. – Realize the photography with a Smartphone according to the criteria of size specified below : 1- Capture your image “Journal d’un instant” and create a unique Instagram post with the obligatory hashtag #igerstoulouse_instadiary2013 and a text of presentation.
2- Send it to the address igersmap@gmail.com directly since the application Instagram (function “send by e-mail”). 3- Take advantage of it to share it on your Twitter, flickr or tumblr to make known the competition and increase your visibility. From all the images received and exposed on Instagram the Jury will choose one which will be held to be part of the prize winners from the collective call to competition. For the prize winners : Send (at the e-mail address indicated above) the image registered in the film of the Smartphone, either at least on 1200 x 1200 px or in superior and sufficient quality to be printed in medium and in large format (between 30×30 cm until approximately 2,00 m x 1,20 m) with a resolution of 300 dpi. – Supply a text of presentation of the photographic project – Inform the organizers of its NAME, First NAME, AGE, e-mail and Instagram pen name. – Obligatory title of the e-mail : APPEL A CONCOUR/INSTADIARY MAP/Toulouse 2013 E-mail address : Specify the igers e-mail address to which the candidates can send files: igersmap@gmail.com
Any incomplete or erroneous participation will be rejected, without the responsibility of “Les Passeurs d’Images”.

.
Article 5 : Nomination of the winners and attribution of the earnings

.
The jury, made up of professionals of the photography, the phonéographie, will indicate the prize winners.
The organizing companies guarantee to the Participant the impartiality, the good faith and the loyalty of the members of the jury.
In accordance with custom, the jury can push aside any image if he considers that it is not artistically adequate.
The jury which gets organized as he understands within his works, will rule supremely, no appeal against its decisions can be admitted.
The decisions of the jury will be established mainly on the following criteria :
– The coherence of the approach compared with the theme
– The relevance of the photo compared with the subject of the competition
– The quality of the photos : framing, originality, treatment of the light, aesthetics
The prize winners will be informed by e-mail by IGERS Toulouse, and also published on the feed Instagram from the group IgersToulouse. If the information communicated by the participant doesn’t enable to inform him about his earnings, he will lose his winner quality and can make no complaint.
The earnings can give rise to no contesting, neither to the delivery of its silver exchange value nor in any form, nor to its replacement or exchange whatever the reason.
If the prize winners are unable to benefit, in whole or in part from their earnings, whatever the reason, they will lose the profit without possibility of obtaining any compensation. It will then be proceeded to a new selection by the jury among the artists.
The Participants give up to the organizers the exclusivity of their exploitation rights on the works till the end of the festival MAP Toulouse in 2013 to make the promotion of the exhibition. Any other use can be made with the photos.

.
The prize winner will be exposed in the city of Toulouse from September the 1st to Septembre, 30th 2013 within the framework of the Festival of photography MAP Toulouse 2013.
The photography will be published on the website of the festival www.map-photo.fr during the whole festival.
The prize winner can get back his image at the end of the last day of the Festival 2013, from September the 30th until October the 31st by addressing the laboratory PICTO by mail via PICTO Toulouse’s site. The expenses of sending are chargeable to the prize winner. Beyond this deadline the print if it is realized on cover and if it is unclaimed by the prize winner, will be offered to the association La Grainerie to be recycled according to their protocol of valuation of plastics and PVC.
The endowments are neither heritable nor exchangeable.
The organizer saves himself the possibility of replacing the endowments announced by equivalent endowments.

.
Article 7 : Publication of the results

.
The identities of the “prize winners” of the competition will be published on the websites www.map-photo.fr www.instagramersfrance.fr and www.instagramers.com as well as on the feed Instagram of the group IgersToulouse.

.
Article 8 : Force majeure
In case of force majeure “Les Passeurs d’Images” reserves the right to modify the present regulation, to put back or to cancel the contest. His responsibility could not be committed because of these modifications.

.
Article 10 : Regulation
The participation in this competition involves the pure and simple acceptance of the present regulation in its entirety including, according to their intervention, its possible amendments and its additives. All the practical difficulties of interpretation or application of the present regulation will be supremely cut by the Organizer. The regulation can be consulted on the web site of the festival MAP Toulouse and instagramersfrance.fr and a copy of the present regulation will be sent free of charge to every person who will make a written request for it to Festival MAP Toulouse (mail or e-mail), and it until the date of the publication of the result of the competition.

.
Article 11 : Personal data The collected data are the target of an IT processing.

They are used by “Les Passeurs d’Images” for the management of the account of the participant and for any operation of direct marketing, whatever the media, realized by “Les Passeurs d’Images” to inform about offers and services. “Les Passeurs d’Images” besides reserves the right, unless otherwise specified of the participant, to exploit and to communicate information to third parties, in particular to offices of market study and polling organizations and it exclusively in purposes of study and analysis, or to companies within the framework of joint commercial transactions or not, in particular for operations of direct marketing. According to the data protection acts of January 6th, 1978 modified by the law of August 6th 2004, the participant has an access right as well as a right of further information, rectification and, if necessary, opposition to the data concerning him. He can oppose at any time to their communication to third parties. Any request of access, rectification or opposition must be sent to the following address : Les Passeurs d’Images – 5 Place Wilson – 31 000 Toulouse.

.
Article 12 : Litigation The present competition is subjected to the French law.