It’s the America’s Cup World Series Event with PUMA, supporting Oracle Team USA. This is the kick-off regatta for the #ACWS 2012-13. 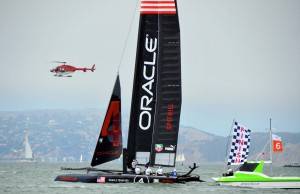 The America’s Cup was first awarded in 1851. The courses were long. The boats slow. Races took hours and could not be viewed from the shore. The new format for the 34th America’s Cup brings sailing closer to the shore and turn this once stuffy event into a spectator sport. There are many vantage points in the America’s Cup Race Village. Pick a spot (or three) and show your followers #HowYouSeeSailing.

Simply use the following hashtags:

Tag photos #pumaSF for a chance to win PUMA gift cards. Red Bull will be on hand to provide refreshments.