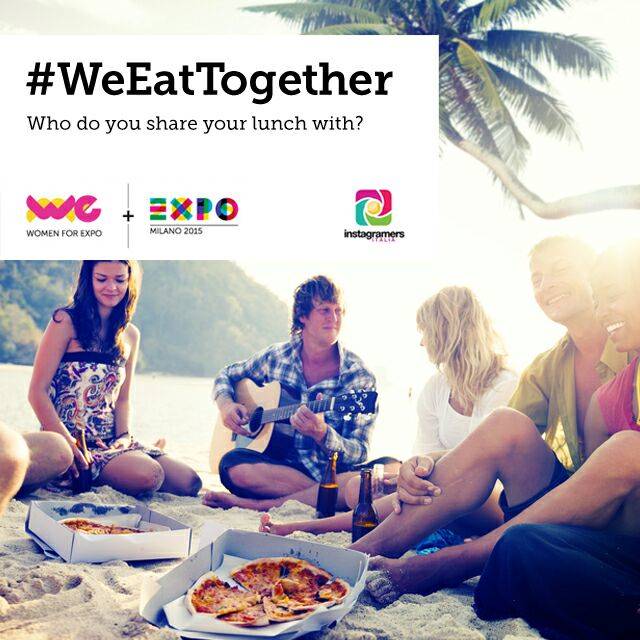 Where and with whom do we share our food every day?

What relationship systems emerge around mealtimes? What are our habits? And how are our habits changing? In London, Beijing and Buenos Aires, from Europe to Africa, from the Americas to the Far East?

WeEatTogether is a photographic Call for Action by WE-Women for Expo developed by the Expo 2015 Social Media team in collaboration with Instagramers Italia and third sector organisations involved in the Universal Exposition 2015.

The challenge is to bring attention to everyday eating habits and traditions, thinking of food not only as a moment of interaction and sharing, but also of re-flection and cognizance.

The aim of the call is to create a macro-social atlas in which the international In-stagram community documents and shares snapshots of interactions between places, food and people to portray who we are and how, where and with whom we relate on a daily basis.

A global network depicting the environmental, economic, historical and social components of eating together, the most universally shared of all interactions.

How to take part in #WeEatTogether

WeEatTogether has been launched by WE-Women for Expo on April 10. The project will last two months.
The call for action is an invitation to men and women from across the globe to document, with one or more images, the significance of food and nutrition in its everydayness, thus helping portray the importance of mealtimes in human relationships.

The focus is not on the actual food, but rather on the moment of interaction that is created around the act of eating together.

The images should be posted on Instagram with the hashtag #WeEatTogether and will be then be collected on a website. All contributors to the project will thus become active protagonists of this call for action and campaign.

.
A specially designated jury will select the 100 most significant images contributed to the project via Instagram between 10th April and 10th June. These will be exhibited in the WeEatTogether exhibition at Cascina Tri-ulza, Expo Milan 2015.