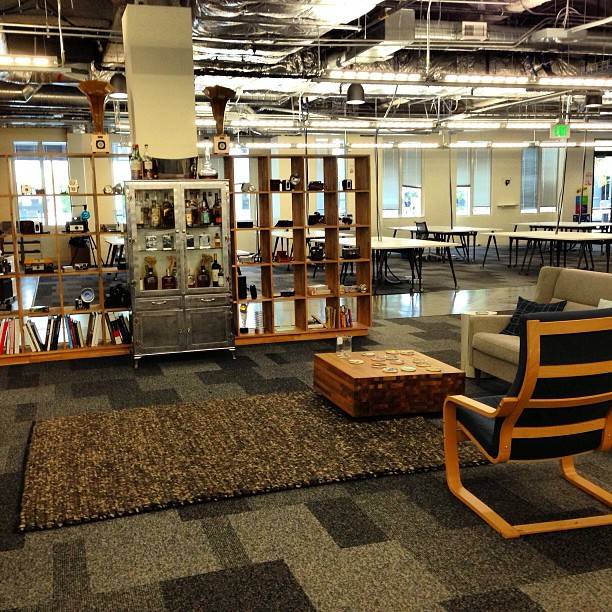 Last week I had the amazing opportunity to visit my Californian Instagramer friends at the #worldslargestInstameet in San Diego, and in as much as I was in The Golden State, I thought it would be nice to finally meet @Josh aka Josh Riedel from the Instagram team in person. Josh and I have been in touch in a virtual manner for quite some time now, always through the APP, and so there was no way I was going to leave without visiting him at the Instagram HQ (Facebook) in San Francisco.

@Josh is as cool and human as one can get, full of common sense and pretty tall to J. A surfer and a skater, he knows how to appreciate a beach and its good waves. He enjoys the early morning walks he takes with his dog just before taking the Facebook shuttle to the office.

It was early in the morning when I drove to FB HQ, I had coffee at a nearby Starbucks and started wondering if this could be one of the places where Zuckerberg and Syström got their caffeine hit in the morning. I discovered one hour later that with the amount of cafes and restaurants that exist on the Facebook Campus, that probability was very low. 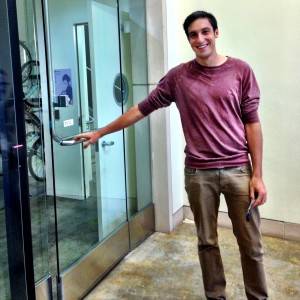 Josh came and picked me up at the entrance and gave me a big hug. A hug is a sign of great friendship and although we had never met in person before, I felt like he was just that, a great friend..

As we walked through the campus, Josh grabbed some breakfast from a cafeteria situated inside building 14 (that’s where Instagram is located) and started to show me how amazing Facebook really is. It’s a real campus with its own life and anecdotes; there is an enormous graffiti on the floor that reads: HACK.

Mark Zuckerberg’s office is completely visible to from the outside, it’ surrounded by transparent windows.

I noticed a “Don’t photograph animals please” written on the side of one of the window panels. Lol.
We visited the campus, the different cafés, the entertainment areas (full of vintage video games) and ended up at the Instagram building, quieter that the others. The building is huge and half occupied at the moment, I posted my first pic sitting with Josh in the Instagram chill out area. This area is where they have decided to recreate the atmosphere of the first Instagram offices, the way it was less than two years ago (it probably seems like an eternity for them). 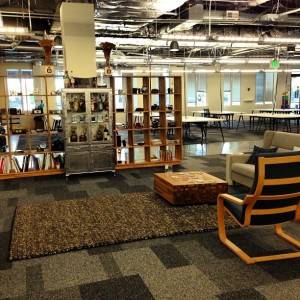 Some users posted comments like “are you at an Ikea store?”,no wonder… Instagram’s building looks a bit like that. However, Josh told me that they were currently working on giving these modern offices a touch Instagram vintage.

On the shelves you could see old cameras; most of them Polaroïds, there was a Bourbon bottle, probably a reference to Kevin’s initial project: Burb’n. I also met a very fluent French speaking member of the team: @DavidRutenberg. David is a real nice guy and he is in charge of business operations in Melanie’s team. I was impressed with the good vibes that existed between the business and community departments within IG.

It was then time to meet Bailey Richardson @baileyElaine, a sparkling and smart young woman in charge of customer relations. As she had her coffee in a cute mug that millions of users would die to have…, we discussed about instagram’s recent improvements, she underlined the company’s wish to find ways to increase its links with the worldwide community. She is responsible for the Instagram blog for which she is doing an awesome job.

After a short and fun interview, we took three of the dozens of bicycles that are readily available on the campus and @ChrisConnolly (recently hired as designer at Instagram) took a pic of us all. Chris is kind of a shy guy but that does not get in the way of his picture taking talent!

He takes amazing pics. That probably explains why he has more that 500K Followers. 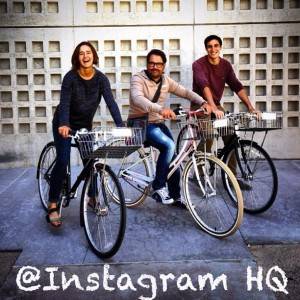 By the time the tour ended, I was left with a nice feeling deep inside of me. Although Instagram has recently been bought and integrated into the powerful Facebook organization, Kevin, Mikey and all their Instagram team have managed to maintain their true character and personality, they are basically the same bunch of guy’s they were when it all started …

In my opinion, this is what has made this app such a great success, an app that is human, close to us and addictive like no other app can be.

.
These “hand carved” Skateboards by @strght hanging on the walls are still a source of inspiration for the “vintage” filters, they symbolize and resume the spirit of a start up that was born in a small office in Palo Alto in October of 2010.