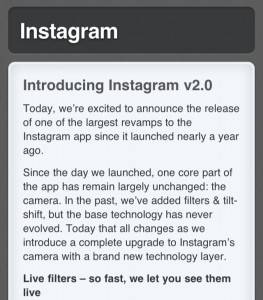 On Tuesday September 20th, our beloved Instagram team launched a new version of our favourite App. The Instagram 2.0.

The night before the launch @Josh of Instagram sent me an email with news of the major event that was about to be unveiled.

They worked on the app all night long and in the morning (European time), we where informed that Instagram 2.0, a new version with loads of improvements, had just been released on the Apple Store.

(Check here to see the announcement and the brand new features of the 2.0 release).

Withing a few hours of releasing the new version, Instagram 2.0 became a trending topic on Twitter and most of the important “Blogs” talked about it.

The entire Igers community rushed to their “update” icon on their iPhones, impatient to find out what changes awaited their photo sharing addiction. 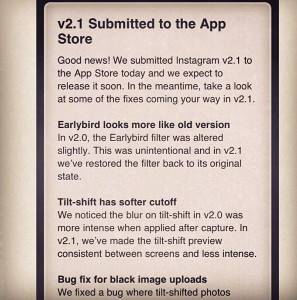 But the changes they brought in where not what we where expecting and many users have been expresing their disapointment.

A few day’s after the launch, Instagram had to submit to Applestore a 2.1 version to resolve the complaints caused by various problems with the original “Early Bird Filter”, the “Tilt-Shift” effect or by the uploading of pictures to Instagram in a black square as reported by some users.

Unfortunatedldy that was not enough.  Many users remained disapointed because they felt the update was not living up to our expectations. 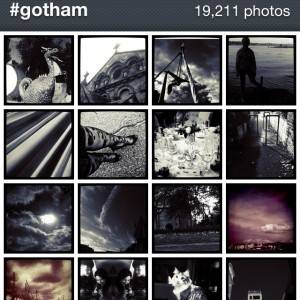 – In reality, what Instagram 2.0 brings is a different way to edit and upload pictures.

– It brings a revamped logo and a new image that blends more smoothly whith the Apple Store.  It adds more volume and “ergonomic forms”.

– The App structure remains pretty much the same: A Feed, Populars, Share, News and Profile.

– New filters that now bring the total to 16 and 2 basic black or white frames.  In this regards, we heard loads of complaints about the “Gotham” filter disappearence. Good by Gotham!! (see my last gotham effect besides)

– Instagram focused 100% of their work on the “Editing and Sharing” functions.

This makes sense because one the main reasons behind the success of the App is its usability, its user-friendliness and its fast and basic editing filters. In focusing their efforts in improving filters and frames, Instagram’s objective was probably to offer the user additional editing tools.  However, we also think that they might be trying to protect the App from the competition offered by other photo Apps that are flourishing everywhere…  I am left wondering if this strategy is really producing the changes that the Instagram user needs.

.
Even our partner Keepsy got inspired and wrote this hillarious parody about the selection process of filters that make or do not make the Instagram cut…

What Instagramers are really waiting for? 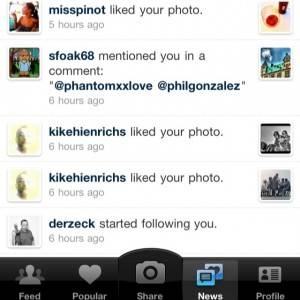 What we need is Better Community Management Tools..

During the past few months, the feedback I have received from both the thousands of users all around the world and from Instagramers.com forums, have led me to believe there is one thing all usersr really want:

New tools to help them manage their connections and feeds!

– The possibility to tag our “Favourite” photos and then keep them in a separate short list.

– The possibility to directly recommend users to friends.

– Access to all your followers or a following list with complete management tools of followers, not only the recent 200.

– Multiple Account Login for people who manage personal and profesional accounts on the same phone.

– Nickname auto-complete function for people you are following.

– We need a parallel system of recommendation of users. As of today only the most followed people are recommended and in my opinion, they are not always the most relevant.  Instagram could find a way to promote people with high ratios of “Likes” or “Followers”, there are more suggestions but we could start with this one…

In my opinion, having “native filters” is an important element for those that are beginning to experiment with the App, but as the user gets more experienced, he quickly realizes he can use other more complete photo editing Apps that exist out there and the IG Filters are quickly left behind.  Nevertheless, that is not a bad thing!

.
It may be that the Instagram team sees those other Filter Apps as a direct threat to them, but should not be the case!  We will remain Instagram Fans because the most important element for us is the “Social Network”, that is where the added value is.
The availability of new tools for information feeds and connections should also be an added value feature of the App and that’s where Instagram needs to concentrate its efforts, not on improving filters that cannot compete with the other filter Apps that are out there.

.
During our @IgersItalia first InstaMeet, I talked with our Italian buddies about this subject and we all wished that Instagram would take IG users suggestions into consideration, we are full of ideas and want to contribute.  It would be simple to organize a “virtual user focus group” to find out what we really need first hand.

This would go a long way in helping them improve the App according to user expectations.