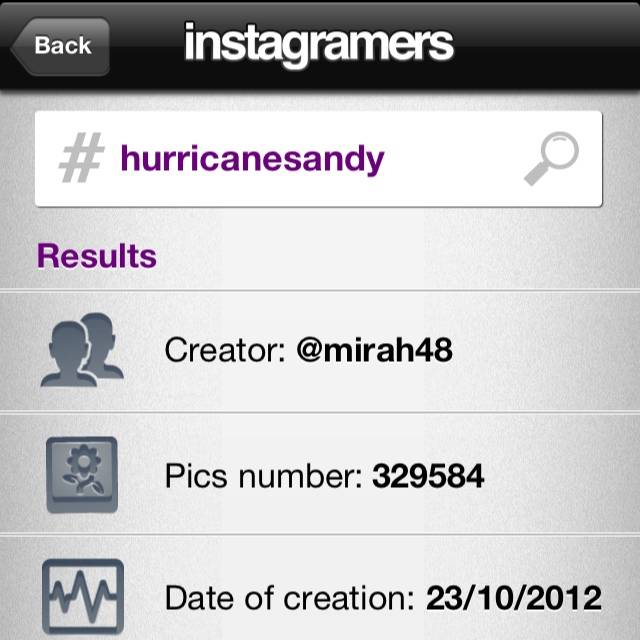 More than one year and half ago we talked here about the importance of Instagram in the future of Communication and Medias.

Last year Japan earthquake , worldwide social demonstrations or even dramatic recent events like Empire State shooting were spontaneously covered by Instagramers through their smartphones. This time, terrible Sandy Hurricane´s effects and thousands pics tagged will probably be the proclamation of Instagram as one of the leading information feeds in the next decade. 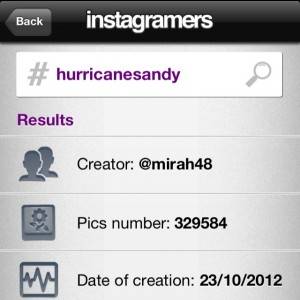 If you “google” the words “Sandy Hurricane on Instagram”, there is already more than 79 million results provided by the search engine.

No doubt, the coverage of our american friends using Instagram has leaded to a social recognition of the app.

Mashable  was informing us since the really first hours of the cataclysm. They announced that our favorite photo-sharing network turned to be the main landing destination for shots of the storm and provided striking figures.

Igers were uploading more than 10 images per second with the hashtag #Sandy  and through two other important tags  #hurricanesandy and #frankenstorm were already above 200.000 pics.

Like quite everything has been said, at Instagramers.com we wanted to know who were the first users who created tags #hurricanesandy and #frankenstorm and which were the two first pics tagged.

We simply  used our “Tag Finder” (available in our Instagramers Free iPhone App here) to find this info. you can try it too. 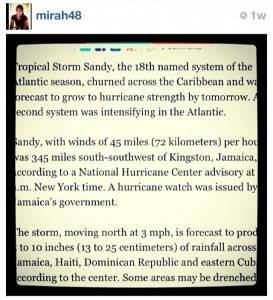 When this young girl with less than 70 pics and 400 followers tagged first a pic with #HurricaneSandy she would probably have not believe the tag would be used by hundred of thousand users in the following dfays. Here, her first pic warning of the Hurricane danger. 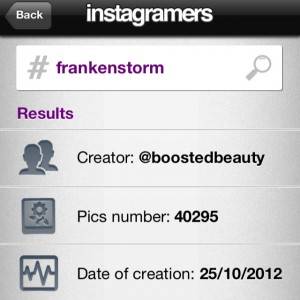 Created by: @BoostedBeauty on Thursday, 25th

This 21 years old girl from Connecticut was not aware that she was the first to tag a pic with #Frankenstorm when she read news around Sandy on the newspapers, five days ago.

It seems that users tend to start tagging pics much before predictable events occur.

This show that Instagram is not only a way to cover events “live” but is also a way to warn people and share information since the really first information is spread.

All our support to victims of Sandy Hurricane and their families.