Coca Cola Spain could soon be launching its own social application inspired in Instagram.

Will Coca Cola Spain be the first brand launching an app inspired in Instagram concept?

Coca-Cola Spain is the spanish subsidiary of the most famous soft drink brand in the world. Our country is probably in the top 5 consumer countries of the famous drink that refreshes and has been with most of us throughout our life. It is a brand that has managed to adapt its image, logo and the way it communicates with the passage of time and has always stood out for its innovative look. Sometimes with luck and other times with less, but there it is, as omnipresent as ever.
.
.
Coca Cola Spain could soon be launching its own social application inspired in Instagram called SmileWorld 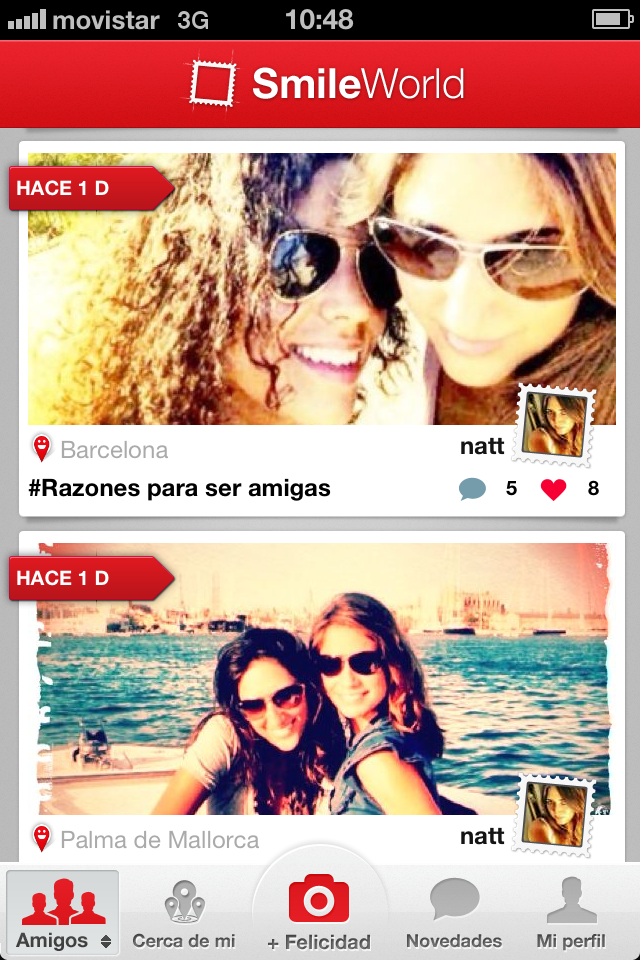 According to information we have at instagramers.com today, the brand is preparing the first app developed by a brand that is inspired on the successful Instagram application. While other brands are still assessing how to use the Instagram in their marketing strategy, Coca Cola Spain has taken the lead and developed its own ‘’parallel’’ photographic and mobile social network.
And why shouldn’t they? It is not that crazy of an idea. Instagram has proven to be a spectacular platform to meet new people, share your special moments of life live.  It is truly what Instagram´s´Founders like to call the “twitter of photography”.

The brand has probably realised the potential and now it wants to offer their own version off  the APP.

The following are the screenshots of the app that we have managed to obtain.
.

As seen in the screenshots, the application has some similarities with Instagram integrating the brands elements with certain elegance. It seems to welcome the user in a “friendly” environment with cool little details like the profile picture, and it seems that the photos might even be amplifiable. There will be “likes” and “comments” too.

What’s in the tab bar? 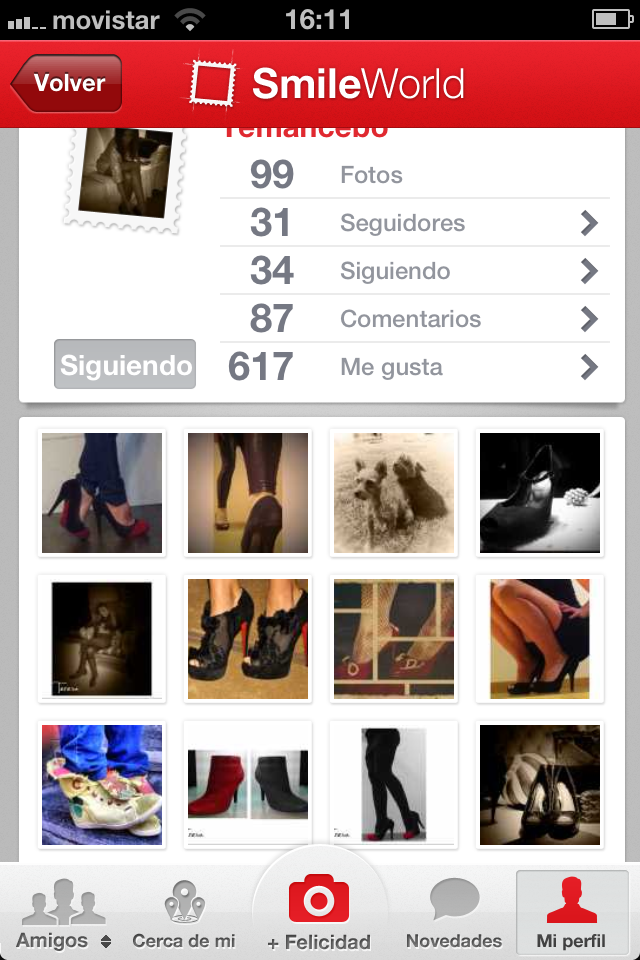 Friends: It will be something similar to Instagram’s own feed of pictures, of pictures from our friends or people we follow.

Around me: There will also be a ​​geolocation element to the App. It seems they have opted for the geopositioning of the pictures (or is it the users?) Instead of the “popular” ranking, which we all know has been one of the reasons for the success of our Instagram app.

+ Happiness: In the middle of the menu situated at the bottom is an option that could be the equivalent to the “share photos” on Instagram and it could be carrying the same functions for photo uploading, along with a “vintage” filter and the possibility to give a title to the photos.

News: It will probably be the same as in Instagram and it will have the list of “events” that affect you, such as people that mention you in other photos, notification of “new friendship” etc. .. Maybe this is where the ‘’Popular’’ section would be?

My Profile: On this particular image we are able to see the same profile functions we see on Instagram: Number of followers and people you follow, number of photos you have accumulated to date and I suppose that you will also find the tools that will allow you to manage your image, your nickname and your personal parameters. But there is a novelty that does not exist on Instagram.   You can see the number of “Likes” you’ve given (on Instagram you can only know that information using web based tools like web Statigram) and the number of comments.

What could this new app mean for the users of the Instagram APP?

In my personal and professional opinion, it is a good idea for Coca Cola to try to replicate an application that has been so successful, and in any case, the timing seems right. Instagram is still not as well known in Spain and the App is still available only on iPhone.  Instagram’s users (in which I include myself) are probably ‘’older’’ than the target the soft drink company is aiming at.  If Coca Cola brilliantly launches the App on Android (as seems to be the case according to our information), it could beat Instagram’s own Android version launch and be a hit within teenage audiences that don’t naturally fit within iPhone users and people of the Spanish Instagram . 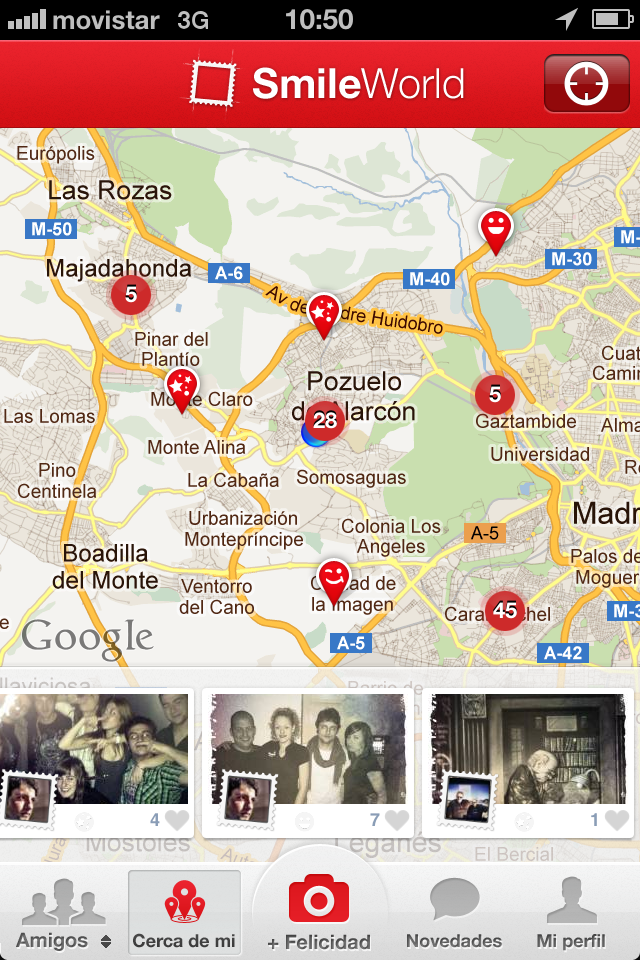 A few years ago Coca Cola Spain was the first brand to announce the creation of its own social network called “Happing”. Halfway between Youtube and spanish top teenager social network Tuenti, it incorporated some of the latest trends used in social networks; a powerful UGC video tool (user generated content) the possibility of having your own profile, to share on social networks and ultimately, make new friends.

.
Making friends in the natural environment of a brand that has been present in most of our happy  experiences, moments and lives.

Unfortunately, the social network was not a great success (in fact today the domain redirects traffic to CocaCola.es) but it seems that it opened a new perspective in the “new” marketing 2.0 style.

They learned that you have to be in the places where people already are, and if they are in social networks, well you will have to be there.

Today the brand has more than 40 million Facebook friends in the world, which is not a bad number at all.

These days everyone is talking about our favorite photography application.

There are over 27 million users worldwide and still growing at a dizzying rithym, it was the App of the year in 2011 according to Apple and it is receiving increasing attention from investors and marketing departments of brands that want to use it to promote their products.

Instagram success is simple. Its an easy to use application that lets you take pictures with your iPhone, edit them with an artistic touch and share it with the rest of the world. Its an application that allows you share your life, what happens around you, the sites you visit and your sensitivity.

In the end, photograph becomes an excuse or rather a good way to communicate and discover new people. It creates an addiction among users like me who cannot spend more than a day without logging in to see what happens, what messages we got, what photos were uploaded or commented by our friends.

It seems Coca Cola Spain found its own way to surf the wave of the photo-sharing trend in mobiles social networks.

We will keep you updated as soon as we will get more information about this curious project.